CARLYLE – Paying fines or traffic tickets is never a pleasant experience. However, new initiatives enacted by the Clinton County Circuit Clerk’s office has made the process a bit more palatable.

Clinton County Circuit Clerk Rod Kloeckner said his office has recently been approved by the Administrative Office of the Illinois Courts to accept voluntary electronic pleas of guilty from offenders in minor traffic and conservation offenses. The circuit clerk’s office also added a new online system which allows defendants to pay outstanding fines and fees on existing traffic and criminal cases.

“This is just another avenue to make it easier for the citizens,” Kloeckner said. “It’s bad enough that you’re getting a speeding ticket or paying off a fine. Why make you take off work or school and make a trip to the courthouse to do something – if you are eligible – that can be satisfied with a click or two of the mouse?In a way, this is just good customer service.”

The e-Guilty and e-Pay programs are part of the Illinois Supreme Court’s e-Business initiative, a movement that encourages the courts to embrace technology in a secure manner while providing taxpayers with easier access to trial courts.

Kloeckner noted that Clinton County has always been a forerunner in this area, creating one of the few paperless courtrooms in the state under former circuit clerk Jeff Luebbers. Clinton County was also one of 19 counties in the state – and the only one in the 4th Judicial Circuit – to be a pilot county in 2012 for e-Appeal, the electronic transfer of record on appeal of cases that go to the Appellate Court. E-Appeal makes the physical transfer of the record to the Appellate Court unnecessary, an often cumbersome, time-consuming and expensive process.

“Many counties don’t have the means or the inclination to change and adapt to the times,” Kloeckner said. “Clinton County never will be one of those counties.”

In addition to e-Guilty and e-Pay, Kloeckner’s office was approved last June for e-Filing, which is the filing of civil court documents electronically over the Internet – rather than on paper – with filing fees paid electronically. Filing and payment procedures are automated with an e-Filing system, dramatically improving operational efficiency. It’s convenient, saves time and reduces paperwork. Kloeckner said the e-filing program for attorneys should be up and running next month.

Acceptance of these types of “e” programs doesn’t happen overnight. Kloeckner said it’s not just a matter of having the right software and case-management system in place.

“There are numerous procedural and bureaucratic hurdles that have to be met by the courts to make sure everyone’s legal rights are preserved, laws are enforced, ect.,” he said, noting the entire approval process for e-Filing, e-Guilty and e-Pay took over a year. “There’s a lot of red tape that has to be cut, but it’s a necessity.”

Kloeckner said the e-initiatives are financed by the circuit clerk’s court automation fund, which is funded through court-ordered fines and costs and is used to establish and maintain automated systems for keeping court records.

The “e” stands for electronic.

“The future of the court system is heading in this direction,” Kloeckner said. “You either embrace the web and the convenience it can offer, or get left behind.”

Clinton County’s e-Guilty program went into effect last Friday. It applies to defendants who receive petty traffic offenses (speeding tickets up to 25 mph, seat-belt tickets, failure to yield, ect.) and conservation offenses that don’t require a court appearance. If an individual receives more than one ticket at the time of the offense, other than a seat belt violation, they are not eligible.

Individuals who want to plead guilty to a petty offense can go to www.judici.com, choose Clinton County from the drop-down menu and pay only with a MasterCard, Visa or Discover card. After payment is made, their account is automatically updated and disposition of guilty entered in the circuit clerk’s case-management system.

Those seeking court supervision on a minor traffic offense are not eligible. They still must come to the circuit clerk’s offense and request a supervision form, or ask for it in court. Individuals pleading guilty can still pay their ticket with cash over the counter or mail in a money order or certified check, but the court must have the signed blue portion of the ticket, which constitutes the plea of guilt.

“For those who just want to plead guilty and be done with it, e-Guilty is the way to go,” Kloeckner said.

The e-Pay program also works through www.judici.com. Defendants can make a payment on a case with outstanding fines and fees as long as the case is closed and a disposition has been entered.

Clinton County is the 15th of 102 counties in the state to be approved for e-Filing, an initiative the Supreme Court ordered last week will be mandatory in all Illinois Circuit Courts effective January 1, 2018. Kloeckner said after his e-Filing is project is up and running, he will turn his attention to e-Citation.

E-Citation involves the electronic transfer of traffic citations by law enforcement to the circuit court’s case management system, virtually eliminating the need for paper. E-Citation eliminates handwriting errors by officers and reduces the amount of time required to process tickets by utilizing barcode scanners attached to the officer’s laptop computer and data imports to the court’s case-management system.

“It would eliminate the officer having to write down all the information in his ticket book with carbon copies,” he said, noting that he has already had several meetings with local law enforcement and a contractor that has been approved by the Conference of Chief Circuit Judges in Illinois. 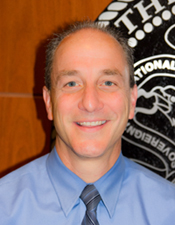